Finding Comfort in Weirdness, Structure, and Murder: An Interview with Kameron Hurley 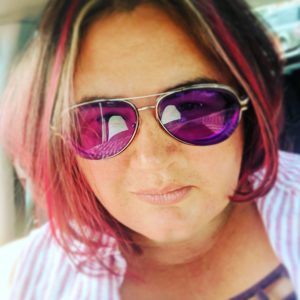 My beat is crime fiction, as most of you know, but I also dabble in other corners of the literary fun house and certain authors who write a lot online like John Scalzi and Chuck Wendig have crossed over into the larger literary community as a whole and are read by folks well beyond their traditional genre audience. Another one of those writers is Kameron Hurley. In addition to her incredibly vibrant and scathing coverage of her own publishing career, she’s also a noted fan of what she calls “murder shows” and has recently found structural inspiration in crime novels as well as comfort. Her latest book is The Broken Heavens, the conclusion to a trilogy I played a small role in acquiring when I ran the crime fiction imprint of Angry Robot, and thought it would be fun to talk with her a bit about how crime fiction and murder seep into her writing and her life.

Anyone who follows you on social media knows you love murder shows. You also did a deep dive into thrillers and domestic suspense novels recently that you mentioned was a conscious effort to level up your plotting game. What was it about these two sub-genres piqued your interest and had you done much reading in the genre before that?

Mmmmmm murder. I have always enjoyed many different genres, including mysteries and thrillers. I’m also a historian by training, so I read a tremendous amount of nonfiction as well. Certainly I enjoy the mindfuck of really well done thrillers and mysteries, smart writing that makes you yell aloud, “Of course!” I enjoy early Stephen King novels, as well. And while I’ve always read thrillers, certainly my interest in them has increased the last five or seven years, as I’ve especially gotten into the “drunk woman everyone thinks is crazy but who solves crime” genre, which I guess is considered a very specific type of domestic thriller. I mean, I can relate!

I also find the structure of these types of novels – especially cozy mysteries or serial mysteries – very soothing. After the election, I binge read all 25 Sue Grafton Alphabet series detective novels and rewatched endless seasons of Midsomer Murders. There is a relief in reading books where you know the bad guys get caught out, the mysteries get solved. There are so many things in the world that are complicated and unknowable, and so many bad guys just… openly being bad without consequence that it’s nice to visit some other place for a while where shit is really different.

My agent and I have also worked very hard on improving how I structure novels, as well. Reading thrillers and mysteries in particular have helped enormously with that. I do read primarily for pleasure, though. While I may initially pick up a bestselling book like The Girl on the Train to see what the fuss is about and study it, I won’t actually read a whole novel unless I enjoy it, no matter how compelling the structure or how many copies it sells. Life is too short.

The book you’re working on now has been described as a gender-swapped Die Hard in space. This sounds awesome and I want to read it right now, but that’s not a question. It seems like your non-series books – The Stars Are Legion, The Light Brigade, and this new book, are growing more and more focused into what some would see as traditionally mainstream sub-genres and plots, but with enough weird and wild stuff to make them unique. Do you anticipate continuing that fine-tuning? At what point do you stop?

When I had my first talk with my new agent, I told her I wanted to work on crossover books with breakout potential, but in a way that I found interesting. Sticking to traditional structures but creating unique and weird worlds has been a good way to do that. I think Cat Valente once said that you can do one or maybe two of three things Weird and still have a good-sized audience. Those things were 1) Weird world 2) Weird structure 3) Weird prose. Even something like Dhalgren only did two of the three, as the characters enter the world of the story from a world that is recognizable as ours.

As I develop story ideas, I have to find something about them deeply weird and interesting. I found that with writing my new book, Losing Gravity, that the more I stuck to that Die Hard structure and the closer I kept it to present day, the less interesting it was to me. So I pushed it out, tweaked the structure, and added more “Kameron Hurley” weirdness to what the corporation is doing. I mean, if it’s not a Kameron Hurley novel, then anyone could write it!

After you’ve read and watched so much crime fiction, have you found yourself getting ideas for crime novels? Do you ever think about doing something that mixes the two?

All the time! I have a series of books I’ve outlined and written a few chapters for that feature a detective who is working in the same universe as my God’s War novels. I initially plotted it using broad strokes from The Maltese Falcon.

What do you think would appeal most about your work to crime fiction fans?

Most of my work features a central mystery. The Stars are Legion starts with an amnesiac (a trope I usually hate, but it works here because it eases people into a Weird world) who goes on a quest to uncover what’s been done to her – and by whom, and how. The Light Brigade is the definition of a mindfuck of a novel, and features a time-traveling grunt who is trying to work out both how she’s experiencing the war out of order and how to end it. And of course the entire conceit of my Worldbreaker series is five very different people trying to figure out how to survive a recurring event where multiple versions of other worlds try to annihilate each other. Losing Gravity is also out next year – that’s the Die Hard in space one – and that one is being explicitly set up as a thriller, which I think a lot of people are going to enjoy.

Kameron Hurley is the author of The Light Brigade (March 2019), The Stars are Legion and the essay collection The Geek Feminist Revolution, as well as the award-winning God’s War Trilogy and The Worldbreaker Saga. Hurley has won the Hugo Award, Locus Award, Kitschy Award, and Sydney J. Bounds Award for Best Newcomer. She was also a finalist for the Arthur C. Clarke Award, the Nebula Award, and the Gemmell Morningstar Award. Her short fiction has appeared in Popular Science Magazine, Lightspeed and numerous anthologies. Hurley has also written for The Atlantic, Writers Digest, Entertainment Weekly, The Village Voice, LA Weekly, Bitch Magazine,and Locus Magazine.

Previous: Pom Dads Behind the Scenes
Next: I Sold a Short Story to MWA