I Sold a Short Story to MWA 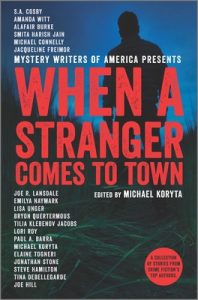 Very excited that my short story “Howard’s Heart” has been selected to appear in the next Mystery Writers of America anthology A Stranger Comes to Town. This is *very* exciting for me because I have always wanted to be in one of the MWA anthologies. I think they’re the premiere anthology of crime fiction every year they’re published.

This will be the biggest market my short fiction has appeared in to date and I’m particularly excited that it’s with this story. First, it’s a PI story and anyone who knows me knows that I started off as a PI writer but abandoned the field after writing several PI novels I couldn’t make work and feeling like the whole genre was passing me by. But lately I’ve had renewed interest in the field thanks to the work of some incredibly talented writers like Ingrid Thoft, Steph Cha, Kristen Lepionka, and Sara Gran among others and have been looking for a way to make it work with my current writing.

Then I met Howard in the hot tub at my gym and got an idea for a story I knew would be great if I could figure out one missing piece from it, then on the way home, wondering what ever happened to Linda Barnes, one of my favorite PI writers, I got the missing piece. I don’t want to say much more because I don’t want to spoil the story, but you’ll be able to read it for yourself next year.

Update: The anthology is now available for sale.

Previous: Finding Comfort in Weirdness, Structure, and Murder: An Interview with Kameron Hurley
Next: Thoughts in the Time of a Pandemic