Pom Dads Behind the Scenes 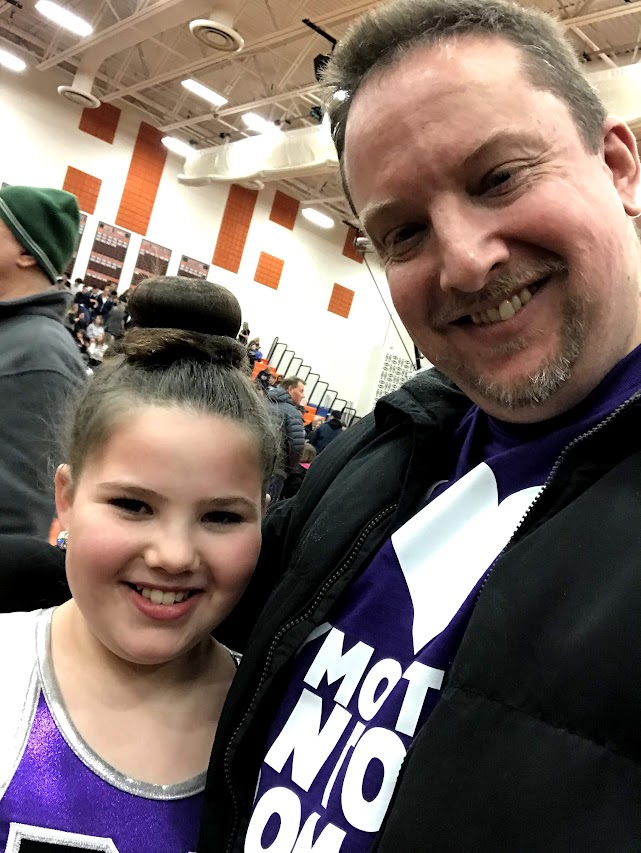 I’ve joked on Facebook a few times that I never expected to be the parent of an athlete and be involved in camps and competitions unless it was related to choir or theater. But Holly auditioned for pom on a whim and made the team and suddenly I’m a pom parent. It really does seem a lot like a reality show and I’ve also joked about being part of a show called pom dads. But I’ve never talked about it here. And I really need to get out of the habit of posting stuff like this to Facebook or Twitter first. The good content should go here, where I own the content, and then I can distribute it through social media.

Today was their regional qualifying competition and they did great, qualifying at the first division level for states (no, I don’t know what that means either). We had to wake up hella early to get there because the roads were terrible, but the strong upside was being able to spend time with just Holly. The last time she competed I was able to see it because I was at Bouchercon. An added bonus was having an hour between when I dropped her off and when the competition started that I used to get in some good writing time. You don’t really feel like a productive writer-parent until you work on a book at some kind of practice.

The school was one of the richest and fanciest in our area and it looked just like the schools schools in the movies. It was crazy. It’s also the kind of school I never want my kids to go to. I have enough problems with the relatively diverse and economically varied district we’re currently in (though I suspect the kids’ time there is likely drawing to a close), and I just don’t see a whole lot of benefit to sending them to a school full of privilege and terrible messages.

We have two more competitions in the next three weeks, so it’s going to be crazy busy, but then we have a break and then it’s spring break and we’re going on vacation.

Previous: Back to the Blog (Not That I Really Left)
Next: Finding Comfort in Weirdness, Structure, and Murder: An Interview with Kameron Hurley