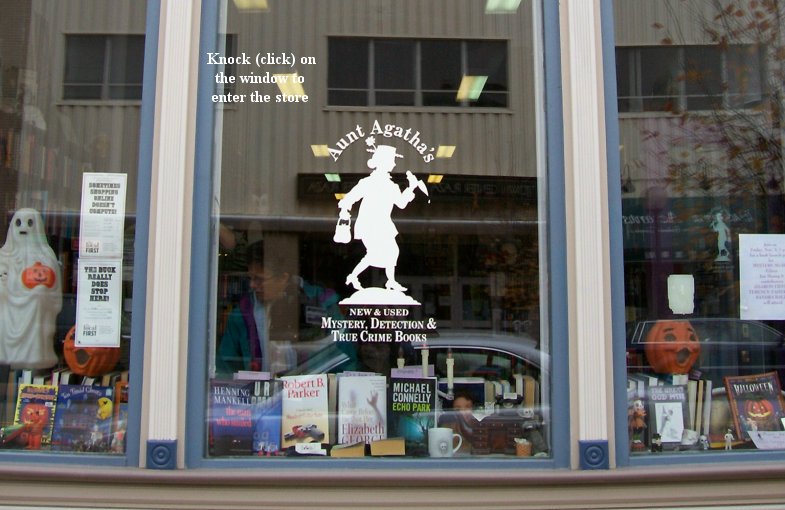 My first visit to Aunt Agatha’s Mystery Bookshop corresponded to my first visit to Ann Arbor when friends from my Flint-area high school theater and choir program trekked out to our closest cultural mecca. They went to find music stores and other quaint shops, I navigated my way (poorly) toward Fourth Avenue where I knew there was a bookstore that specialized in mystery books. After having spent most of my formative early reading years steeped in science fiction and fantasy, I had come to the mystery field only a few years previously and was still looking for the works that would shape me as a reader and as a writer. I found almost all of those books over the years at Aunt Agatha’s.

I remember very explicitly that first visit getting paperback copies of The Godwulf Manuscript, The Continental Op, and The Big Sleep. I didn’t have a lot of money then, so my early purchases were all used paperbacks. I would scour the shelves at my local library and find new authors for free, then when I found someone I loved—Sue Grafton, Robert Crais, Michael Connelly, Laura Lippman, Harlan Coben, and Loren Estleman were early favorites—I would head to Aunt Agatha’s with my friends and pick up the paperback of the author’s first book in the series and then the most recent paperback available on the used shelves.

My obsession with PI fiction was fed almost entirely by this store as I loved from being able to afford new paperbacks (this was the go-go 90s when there was so much great PI fiction appearing for the first time in paperback). Occasionally I would make it out there for a signing and splurge for a hardcover. Steve Hamilton and Harlan Coben were two I made annual visits to the store for. As I started reading more and more cozy novels in addition to the PI stuff, Aunt Agatha’s was the first place I visited and started buying books off the shelf based on the funny titles. This is where I found Lawrence Block for the first time. Believe it or not, I never ended up coming across him in my early PI readings, it wasn’t until I found a paperback copy of The Burglar Who Thought He was Bogart that I discovered what I had been missing. I read three or four more Bernie books and only discovered Scutter when I got a copy of A Long Line of Dead Men thinking it was a Bernie Book because of the bright yellow and red paperback cover.

When PI fiction grew stale for me and I wanted to catch up on all of the noir I missed, I picked up a pile of Vintage Black Lizard paperbacks from Aunt Agatha’s including Jim Thompson, James M. Cain, and Patricia Highsmith.

As I’ve grown older and been able to afford hardcovers, I’ve gotten most of them from Aunt Agatha’s and most of them are signed. I got married and had kids and moved away from Ann Arbor, but still visited, bringing Spenser and Holly to see the store and play in the back with toys Jamie and Robin provided for their family-minded fans. Jamie and Robin were the first mystery people Spenser and Holly ever met.

The two books I read in a single weekend that snapped me out of a near fatal (creatively at least) slump and indirectly led to my first truly BQ novel and my first book deal, were Duane Swieczynki’s The Wheelman and Victor Gischler’s The Pistol Poets, both purchased at Aunt Agatha’s. And when that first novel of mine was published, Aunt Agatha’s was there with a cake and a book launch party and the beaming pride of seeing one of their own make it.

Our relationship hasn’t always been perfect. I got stupid after that first book launch party and instead of sticking with the ones who raised me, I went to another book store that had better parking and better freeway access and spent too much of my own money on cupcakes and felt awful about it. But Jamie and Robin were gracious and forgiving and we all made up at, of course, a Steve Hamilton signing. I always hoped I’d be able to do another book signing there, and now I feel terrible for authors who have yet to publish their first novels who won’t get to experience the joy of signing at Aunt Agatha’s.

Robin and Jamie literally made me who I am as a reader and a writer and I will never forget that and I will always be thankful for that and now I’m going to go have a good cry.